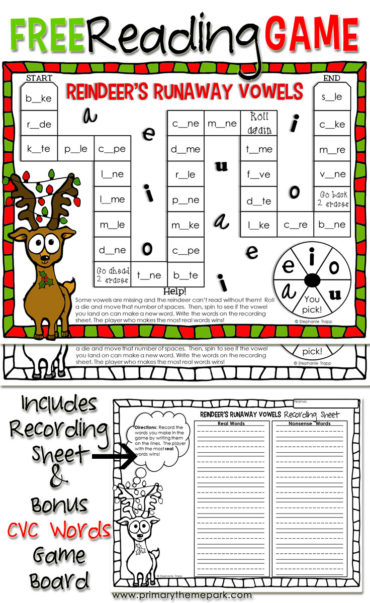 On Fridays this December, I’m going to try to incorporate some Christmas fun into our day.  I think I’m going to focus on one Christmas-related theme each Friday, with the first one being reindeer.  In planning for this day, I created this Christmas reading game printable for my son called “Reindeer’s Runaway Vowels”. I had created a similar version earlier in the year for him when he was learning CVCe words and he loved playing it. So, I thought I’d make a Christmas-themed one, too!

Here’s what you’ll need to play:

Here’s a sample of the two different recording sheets: While I was at it, I went ahead and made an extra game board to practice CVC words, as well. These two games would be a perfect activity for centers or review of CVC and CVCe words.  I’ve included both black and white and color copies of the game boards in case you would like to laminate the color ones to reuse in a center.  We’ll be playing this game next week and you can, too!