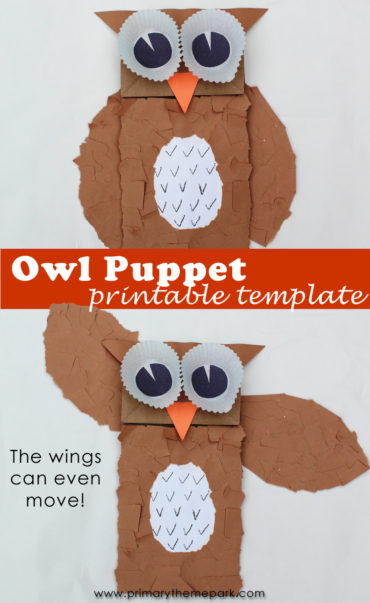 This fall, I’ve been teaching a Pre-K and Kindergarten art class at a local co-op that we attend. Each week, I read a book and then we make a craft or piece of art based on the book.  I knew I wanted to read a book about owls and then make some type of owl craft.  I couldn’t find exactly what I was looking for on Pinterest, so I decided to draw inspiration from two different owl projects I saw on there and create my own.  I thought the cupcake liners for eyes on this owl were super cute and loved the overall idea of making an owl puppet that was similar.  But, I also really liked the torn paper owl crafts I found like this or this.  So, I decided to combine the two and came up with this torn paper owl puppet.  Here’s how we made them, including a link to the owl puppet template I made to share with you! Make sure to glue some construction paper pieces under the flap below the beak.  If not, when the puppet is opened, it will just be plain, brown bag underneath. I used white cardstock for the wings to make them more sturdy.  I think construction paper wings might just flop down to the side. I just LOVE how they turned out!

I have to give credit where credit is due.  My five year old son was making up a version on his own while I was making an example to show my students at co-op.  He’s the one who came up with the idea to make their wings movable by adding the small metal brads!  That was just the perfect touch to make these owl puppets even more fun to play with!   He had a blast moving their wings around and positioning them in different ways to make it look like the owl was flying as he raced across the house.

Here are a few books that would be great to read before making this owl puppet:

And speaking of owls, one of my kids’ favorite read aloud books of all time just so happens to be about owls, too:  Owls in the Family by Farley Mowat. I highly recommend this book, especially as a read aloud or chapter book for young boys.  My son hung on every word of it!