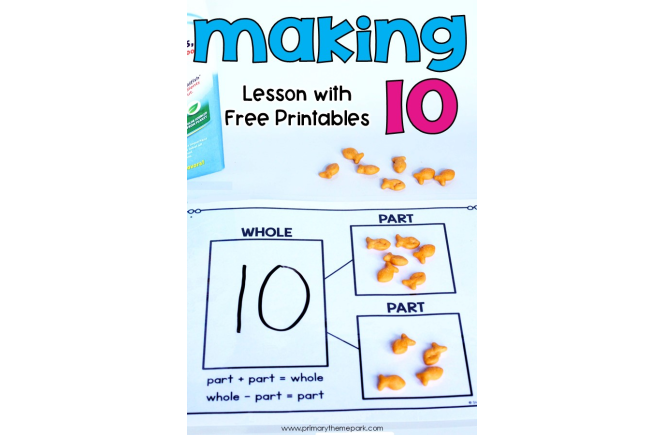 Since the beginning of the school year, I’ve been working on slowly introducing the memorization of math facts to my son. This week we’ve been focusing on learning the numbers that add up to ten.  I thought I’d share with you the making 10 activities we’ve done this week, including a free game I created!

We started off by using manipulatives to show how we make ten, and what better manipulatives are there than Goldfish, right?  I truly speak my son’s love language when I use food as math manipulatives.  🙂

One of the foundations of our math program, Singapore Math, is getting kids to think of numbers in terms of whole and parts.  So I started by counting out 10 goldfish and placing them in our “whole” box. I had my son count them and then tell me the whole or total amount of goldfish. Then, we wrote the number “10” in our whole box and moved all the goldfish into one of the “part” boxes.  We wrote a number sentence to represent our picture: 10 goldfish in one box plus 0 goldfish in another box equals 10 goldfish in all– 10+0=10. Next, we moved one fish from the top “part” into the bottom “part” and again wrote a number sentence to represent our picture.  I love this as a visual because kids can see that they still have 10 total goldfish.  They haven’t taken away or added any, they’ve simply just shown it in a different way.

We continued moving one fish at a time from the top “part” to the bottom “part” recording our addition sentences as we went. Once we started making number sentences that we’d already done with just the numbers reversed, I wrote them beside one another.  Doing so helps him easily see the commutative property of addition (even though we don’t call it that yet!). He moved all the goldfish one by one into the bottom “part” until none were left in the top.  Once he found all the numbers that  make 10, it was time for his favorite part: eat the goldfish! 🙂 Next, I taught him a little song I made up to the tune of “Frere Jaques” to help him remember the numbers that make 10. I made the song to include the number pairs that make 10. He understands that the order of the addends can be reversed and it still equals 10.  He knows that “8 and 2” can be 8+2 or 2+8.  We sing it everyday and he’s learning these math facts very quickly!

Our final making 10 activity we did this week, and probably his favorite, was the “Spin to 10” game I made for him to practice these facts. To play, you put a paper clip in the center of the spinner and hold it in place with a pencil.  Next, you spin the paper clip and see what number it lands on.  You color in the number on the grid that when added to the number you land on will equal ten.  For example, if you land on 4, you would color in one box with a 6 in it because 4+6=10.  You keep spinning and coloring in until you have colored in five boxes in a row.  The five boxes in a row can be vertically, horizontally, or diagonally. The file contains the whole and parts mat, making ten song and two versions of the game. Here are a few videos I found that are a great complement to this lesson!

Are your students working on math facts right now?  I’d love to hear any ideas you might share for how you teach your students to make 10!