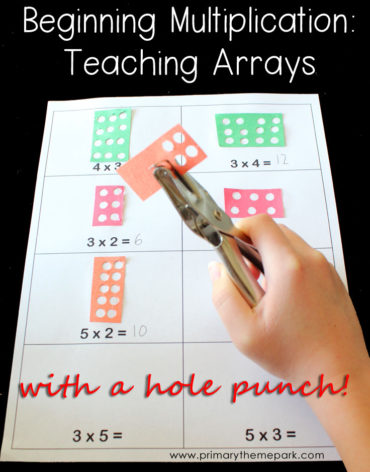 My friend, Kim, at Life Over C’s has an awesome 21 day series going on her blog called “Learn with Your Craft Stash“. The series focuses on learning activities you can do with craft items you have around your home or classroom. I’m joining in today with how to use construction paper and a hole punch to teach multiplication arrays. What is an array, anyway?  An array is an orderly arrangement (most often in rows or columns) of numbers or objects.  An array can be used as a visual representation of multiplication as repeated addition.

We use Singapore Math 1A and 1B with my youngest. Beginning multiplication is introduced in first grade right after students learn repeated addition.  Students go from learning and solving 2+2+2, to relating that to 2×3 (2 three times).

Here’s a fun and engaging activity we recently did when studying this concept.

Next, I cut several small rectangles out of construction paper.

Then, I had my son solve the multiplication problems by making an array on the rectangle with a hole punch. We talked about how the first number told him how circles to punch. The second number told him how many columns to make of that number. So in the first example, he made three columns of four circles (the number four, three times).

Once he punched all the holes, it was easy for him to look at the rectangle and count the holes to find the answer.  I had him work on two problems side by side with the same factors. I wanted him to see that reversing the order of the factors didn’t change the answer.  5×2 is the same as 2×5. My son loves using the hole punch and had a lot of fun using it to do his math problems!

If you’re interested into other hands-on learning activities using craft supplies you probably have lying around, click on the picture below to check out all of the “Learn with Your Craft Stash” posts!