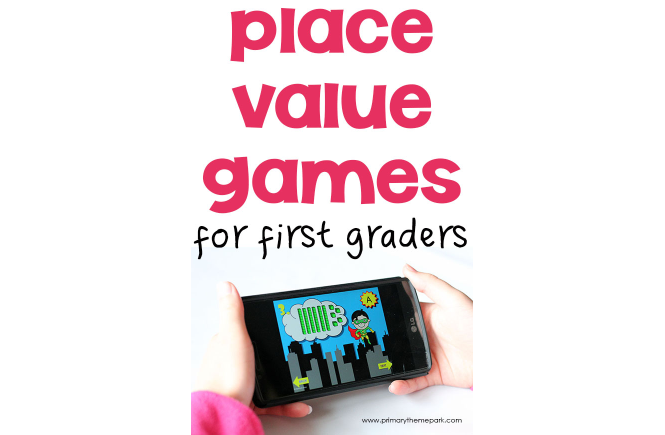 I love incorporating games into math as much as possible.  Who doesn’t love playing games, right?!  But the problem with games is that they often require quite a bit of prep work for us teachers.  I’ve been trying to come up with some that require little to no preparation to use.  I’m so excited to share these place value games for first grade with you that are student AND teacher friendly!

This is by far my kids’ favorite game!  It’s such a fun whole class activity that students will want to play again and again.  It’s also great to leave for a substitute teacher.

My kids love scavenger hunts, so I thought, “Why not do one with numbers?”  In this activity, students look for numbers in the real world that fit a certain description.  For example, they might look for a number with a three in the tens place, or try to find a number with a five in the ones place.  They cut out the number and glue it beside the clue it matches. We used food packages from our recycling bin and magazines to find the numbers for our hunt.  Students might also use newspapers or other printed materials to search for numbers.  Sales ads are a bit tricky because sometimes the numbers are written in dollars and cents which can be confusing to young students.

I suggest doing this as a special activity for students to complete at home and then return to school.  If you want to do it as a center activity, have an ample supply of materials students can look through to find numbers.  Another alternative is to print out a bunch of numbers for students to search and cut out for the activity.

At the end of the post, you can download this activity for FREE!  I included several options to make your job easier and to help differentiate it for all students. I also provided an editable note to send home if you choose to use this as a homework activity.

These place value games for first graders are my latest labor of love in my TPT store. 🙂 In them, students are on a mission to earn their super powers in place value! They practice place value skills as they catch The Jokester, find the missing gem, and other tasks in these eight engaging PowerPoint games.  These games are perfect to use as math centers or whole class activities. And the best part? They can also be played on tablets and smart phones using the Microsoft PowerPoint app! My goal for these games is that students are able to complete them independently with little to no help or supervision.  All of the directions and words on the screen are read aloud to the students so even non-readers can successfully play them.  There are “next” arrow buttons that students click to move through the game, and “back” arrows that allow them to go back to previous screens. There’s even fun superhero-themed music in the background that can be turned down or muted! If students are completing these on their own, how do you know they’re actually understanding the concept or getting the answers correct?  Each game has a recording sheet for students to write down their answers and answer keys are included.  I like the accountability that the recording sheets provide.  They also allow these games to be used for assessment. These games are almost like digital task cards with a twist. Try Before You Buy!

*Please note: They DO NOT run as intended in Google Slides, OpenOffice, or Keynote.*

Wondering if these games are compatible with your device or software? Click HERE to try “Find the Mystery Number” for FREE before purchasing to make sure it will work for you.

If you have any questions about the PowerPoint games, leave a comment below or email me at primarythemepark@gmail.com. I’ve had several teachers try them out for me and they’ve been successfully played on PCs, MACs, laptops, iPads, iPhones, and Android smart phones.  Click the picture below to find out more!

I hope these place value games are something that you’ll be able to use in your classroom.  I think they’ll be engaging for your students and low-stress for you.  Don’t forget to download the Place Value Scavenger Hunt before you go!