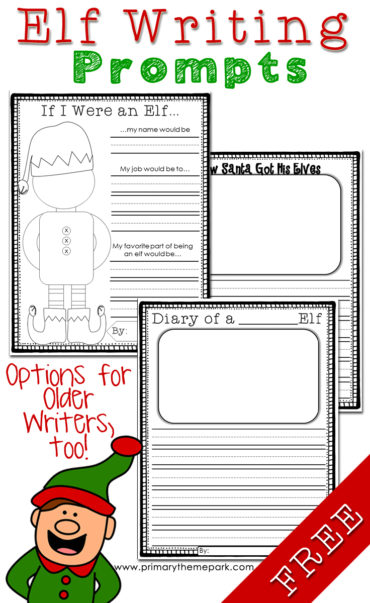 Last night, we had a family movie night. We decided a couple of weeks ago what our pick would be: Elf.  My kids haven’t seen it and I hoped they’d find it as funny as we did when we first saw it.  Since I knew we’d be watching Elf, I thought I’d make elves our Christmas theme for the week.  Here are some elf writing prompts I created for us to use and some other fun elf ideas.

I saw someone post something recently on Facebook about finding out what your elf name would be.  I thought the kids would love to do this, so I had them create elf names and then write about their job as one of Santa’s elves. There are several cute charts with directions on how to create an elf name like the ones found here or  here.  There’s even a Christmas Elf Name Generator where you can plug in your name and it will generate an elf name for you. My kids got a big kick out of it! We spent a lot of time plugging in our names, family members’ names, and friends’ names to see what their elf name would be. It came up with the elf name “Nougat Greenfir’ for my son and he loved it!

He decided to use it for his elf name in his prompt. Here’s how his turned out: Translation: “If I were an elf, my name would be Nougat Greenfir.  My job would be to make magic mice.  My favorite part of being an elf would be helping Santa get reindeer ready.”

Another writing prompt we did was “How Santa Got His Elves”.  I had checked out The Elves’ First Christmas from our library and knew I wanted us to read it. Before reading it, I had the kids write how they thought Santa came to have his elves. I had my son dictate his story to me and I wrote it down. He can create stories all day long, but just can’t write down such a long story yet. We had to finish his story on the back: “…them a story about the first Christmas.  Then, the elves said, “Yes!”  The elves started working for Christmas.” After writing, we read the book and then discussed how their ideas were alike and different from the story. Afterwards, we researched online about the origin of Christmas elves.  We found the most helpful information here.

Our last elf writing prompt attempted to tap into something that they know and  love.  My kids are nuts over the Diary of a Wimpy Kid series right now.  We just finished the second book and they can’t get through them fast enough.  So I thought a few elf diary writing prompts might be fun, too!

I created a shorter, more structured prompt for beginning writers, and a more advanced one for older students.  For “Diary of a ________ Elf”, students choose an adjective and then write a diary entry based upon an elf with that description.  I didn’t include them here, but my daughter chose “Diary of a Sneaky Elf” and wrote a story about an elf who one night sneaked and ate all the delicious cranberry toothpaste and then blamed it on another elf.  She loved writing and illustrating this one! Memoirs of an Elf is another great book to read when using the “Diary of an Elf” prompt.  It’s a really cute story that begins on Christmas Eve and tells what happens throughout the day as Santa and his elves prepare for delivering presents.  Everything goes according to schedule until they realize a family pet has gotten onto Santa’s sleigh.  They must figure out a way to get the beloved pet home in time for Christmas.

And finally, here are some adorable elf craft ideas I found on Pinterest that would be so fun to do with any elf theme: Updated- Here are a few more adorable elf crafts I’ve spied on Pinterest since I first published this post:

Are you incorporating elves into you classroom this month?  If so, I’d love to hear any other elf ideas you’re doing!

These writing prompts got a little makeover in November 2018.  They’re the same content with new and better fonts. 🙂