Fun Greater Than Less Than Activities 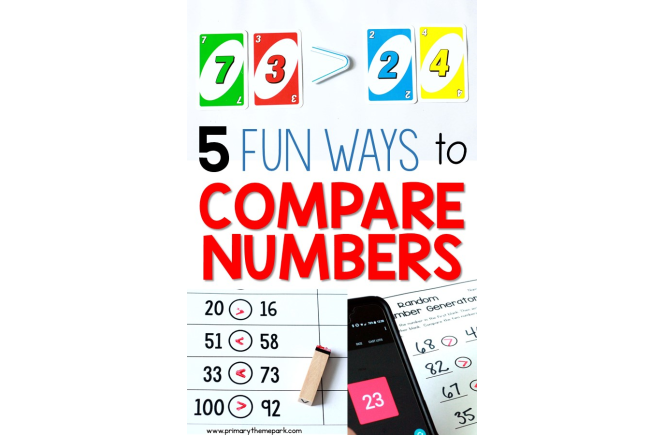 Comparing numbers doesn’t have to be boring.  Here are five fun greater than less than activities your kids will love.  They make easy, low-prep math centers, too!

Greater Than Less Than Stamp Similarly, if you have alphabet stickers, use the letter “v” as a greater than less than symbol to fill in inequalities. Using stickers is great for a small math group or an individual student who needs extra practice.

Hands-on Greater Than Less Than Symbol Extend and bend the end of a flexible drinking straw into a “v” shape.  Cut off the excess straw. Make numbers using playing cards or number flashcards.  Compare the two numbers using the greater than less than symbol made from the straw. Look through newspapers and magazines for numbers.  A great place to find numbers is in the sales ads inserts that come in newspapers. Cut them out and use them to make or fill in inequalities.

Download a random number generator app. The app should allow you to set the number range.  For example, I used numbers 20-100.  For younger students, you might set it to generate numbers 0-10 or  0-20. Use the app to supply the numbers to write inequalities. Make one, two, or three-digit numbers by turning over playing cards or number flashcards. Record the number. Spin to determine which symbol to use: > , <  or =.  Write the symbol.  Then, think of a number that will complete the comparison and write it down.

The recording sheets for the activities in this post can be found in my TPT store.  The resource includes 12 differentiated worksheets, 5 math center games/activities, and 1 board game.  Click here to learn more!