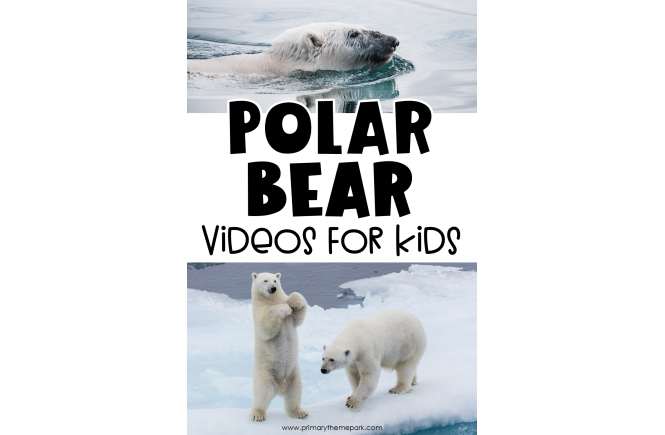 Take a trip to the Arctic without leaving the comfort of your classroom. Just add these polar bear videos for kids to your polar bear unit this winter! They’re great to use for centers or to reinforce learning. I’m going to start with the one that I think, hands down, will be your students’ favorite!

The Video Your Students Will Ask For Over and Over

I’m pretty sure your students will ask to watch this video more than once. It’s the cutest, catchiest song about polar bears rolling in the snow. It’s a great song to play as a brain break! (1:00)

Polar bears live in the Arctic Circle. Learn all about the habitat and animals that live there in this twenty minute video. (20:03)

Take a closer look at a polar bear family walking and playing on sea ice in their natural habitat. (3:40)

Students might be surprised to see polar bears in a field of flowers during summer in the Arctic. (1:43)

Polar bears are carnivores that love to eat ringed seals. This video explains how polar bears hunt seals and the role sea ice plays in the hunt. (4:26)

This video contains spectacular footage of newborn polar bear cubs and their mother inside their den. It also shows their emergence from the den months later. This video is a little over six minutes long and focuses on polar bears for the first four and a half minutes. After that it talks about seals for the remainder of the time. (6:18)

This is another great video detailing the polar bear life cycle. It begins with polar bear cubs coming out of the den and details their growth until they’re ready to live on their own. The video has text at the bottom that you might need to read aloud to young students. (2:38)

Polar bears are perfectly built for the harsh Arctic region. This video highlights several of their features like two layers of fur, thick layer of fat, swimming abilities and large body size. Caution: This video does show a polar bear eating a seal. It’s not close up, but the snow around it appears reddish-pink. I suggest previewing it to see if it’s suitable for your students. (3:41)

I love this video because it touches on so many polar bear adaptations. However, the narration can be hard to understand at times. If that’s the case for your students as well, I suggest turning the sound down and reading the labels aloud to your students instead. (0:58)

Learn how to draw a cute polar bear cub with this step-by-step video. It even tells you when to pause the video to draw on your own. (3:16)

Older students might enjoy following this video to learn how to draw a realistic polar bear. (14:27)

Need more polar bear videos? Check out my playlist with over 35 polar bear videos for kids! I’ve watched and vetted them all, but I still suggest you preview them before showing them to your students. A few videos show polar bears eating seals. However, I tried to only include videos that weren’t especially close up or bloody.